What a summer vacation I had! I was blessed by my daughter and son-in-law with a trip to Oahu, Hawaii. They were both stationed at Schofield Barricks. Since my son-in-law was deployed I had the awesome opportunity to spend 10 days with Katie. Girl time!!! She emailed me before the trip asking for what I wanted to do and see on the island. I sent her my wish list and she got planning. We had a routine going. Up around 8am and out the door by 9:30am.

When I arrived at Honolulu Airport I was instantly overwhelmed by the gardens as I walked from the gate to the baggage claim. I saw a gentleman with a lei ready to give to his arriving guest. How I wanted a lei. As I made my way down the airport stairs I saw Katie with the most beautiful lei in her hands for me. It smelled so wonderful, and I was so grateful for it.

There is so much I want to share about my trip to Hawaii. I decided to do a top 10 list.

10. Surf and Sea Paddleboarding was quite a challenge for me. First time ever. Katie was more of a natural. There was a small channel that was super green with sea turtles. I used the board more like a knee board. I did not take any pictures that day. Boo hoo! Here are a few from online. 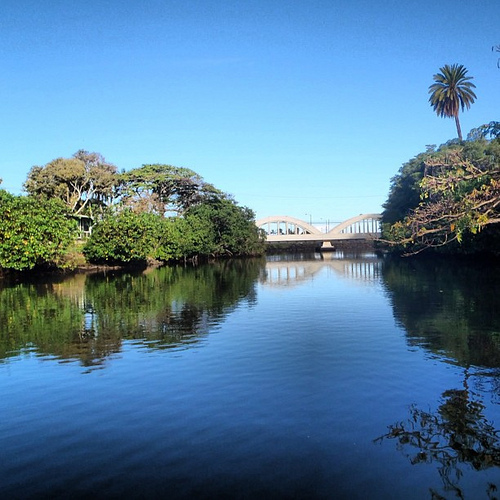 We did SUP on the waterway going under the famous Haleiwa bridge.


9. Hidden Beach on North Shore  We headed to Hidden Beach after our snorkeling trip to Haleiwa. You definitely need a 4 wheel vehicle for this trip. The paved road ends and you go about a mile more down a very rough dirt road to this gem. There was only one couple there when we arrived. Katie handled Thomas's truck like a true pro. I was quite impressed. 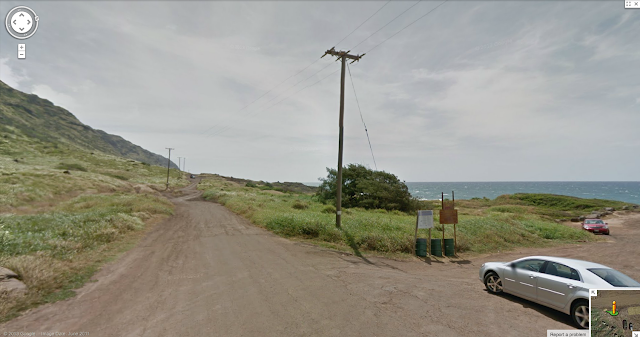 Here is Google Maps screen shot of where the paved road ends and the 4 wheeling begins!

Katie found salt among the rocks. So remote and beautiful.

8. Waimea Valley Botanical Gardens & Waterfall was a beautiful paradise of the main road of the North Shore. There are 130 acres of gardens that lead to a beautiful waterfall. Several movies, such as Lost and George of the Jungle, did filming here. The water was chilly, and the landscape was green and lush.

7. Pearl Harbor was such a history lesson. We drove around Ford Island and visited the USS Utah and a quick stop to look at the planes outside of the Pacific Aviation Museum. We had purchased advanced tickets to the USS Arizona Memorial. The movie they show beforehand is powerful. I bought a few middle school aged books for my classroom. I couldn't help myself. If you go to Oahu you must see Pearl Harbor.

USS Arizona Memorial & the tears of the Arizona. 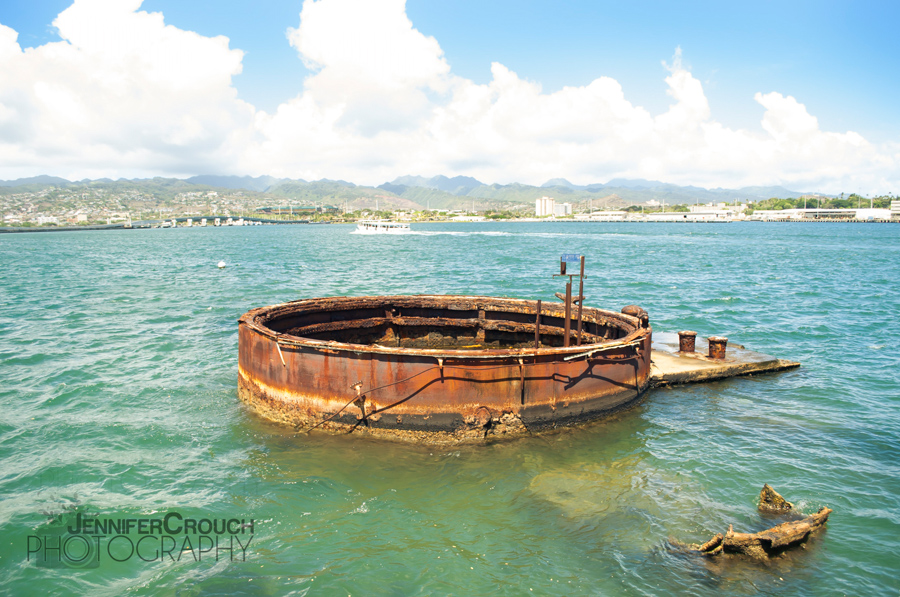 USS Arizona is now a reef for fish. 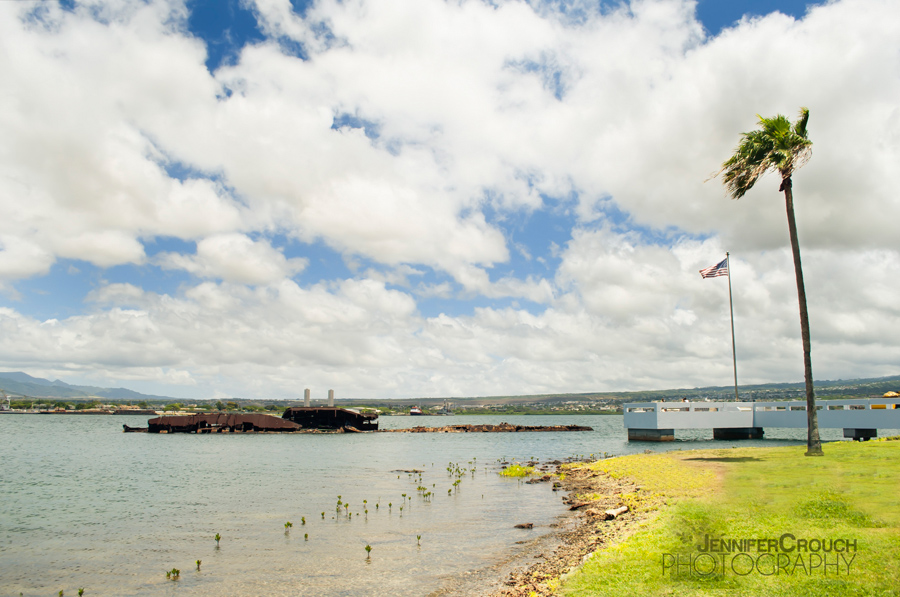 The USS Utah on Ford Island. 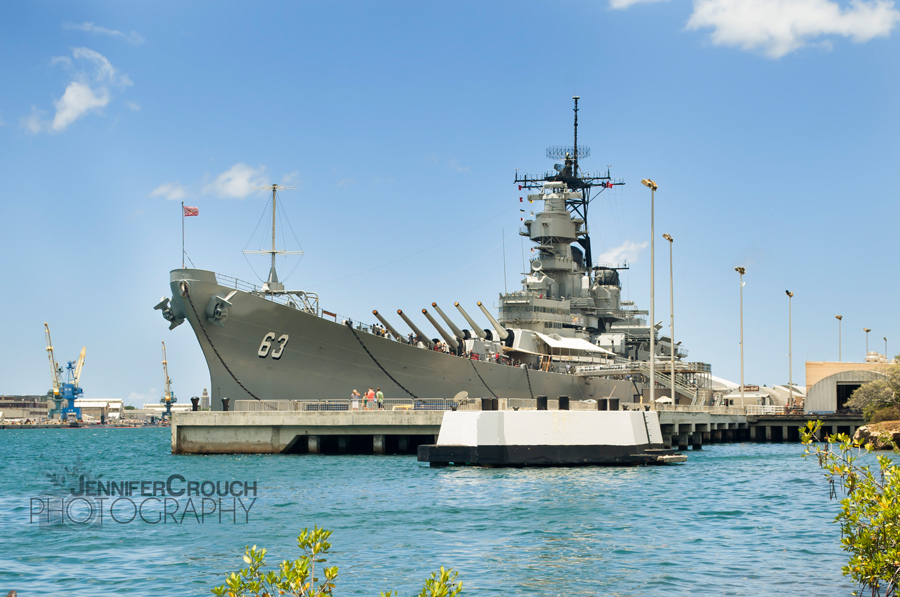 The USS Missouri. What a sight!

6. Flora and Fauna and Hula too! From the moment I stepped off the plane I kept asking Katie what was the name of that tree, what was the name of that flower, what type of bird is that? She finally started making up names to be funny! The island was truly tropical. Much more so than Florida in my opinion. They made leis out of plumeria. They grow everywhere on the island. It became my favorite flower. I shared this with my 6th grade class when we studied plants in science. One of my students brought in leaves and flowers from her grandparents yard. It was plumeria that grows in Florida. My dad gave me two of them just recently. I hope I don't kill them!! 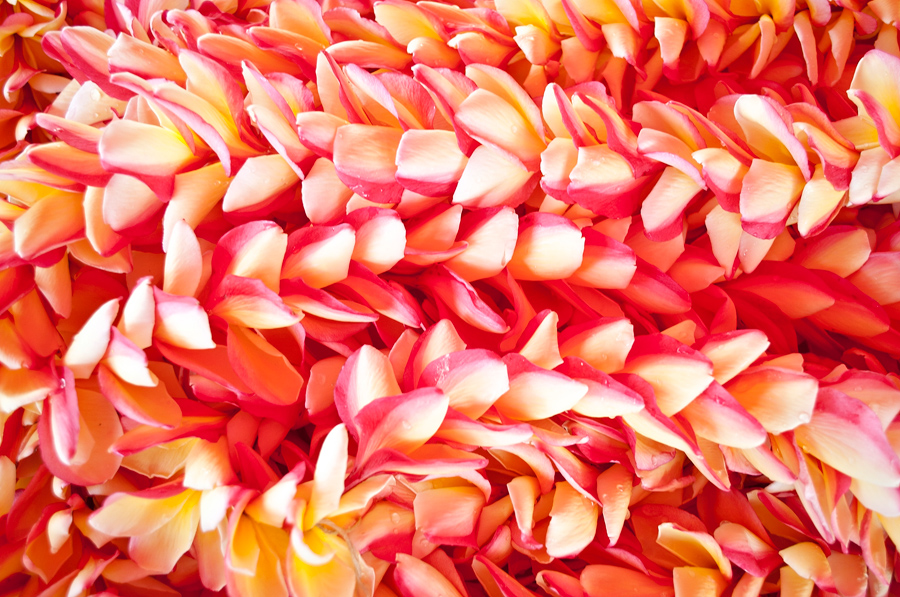 Plumeria lei sold at a stand in the Dole Plantation. I did not take bus or train tour but we walked in gift shop and around to learn about how they grow pineapples.


On my to do list was a hula lesson. They offered them on base. You work up quite a sweat as your knees are always bent and it is a major workout. I did two back to back lessons. The 2nd class was advanced and they were learning a routine to perform.

5. Diamond Head was a steep and strenuous hike but well worth it. It was more crowded on this hike than at Makapu'u Lighthouse Trail. There are WWII bunkers at the top and a fantastic view of Waikiki below. Pack plenty to drink and get there early since parking was limited. 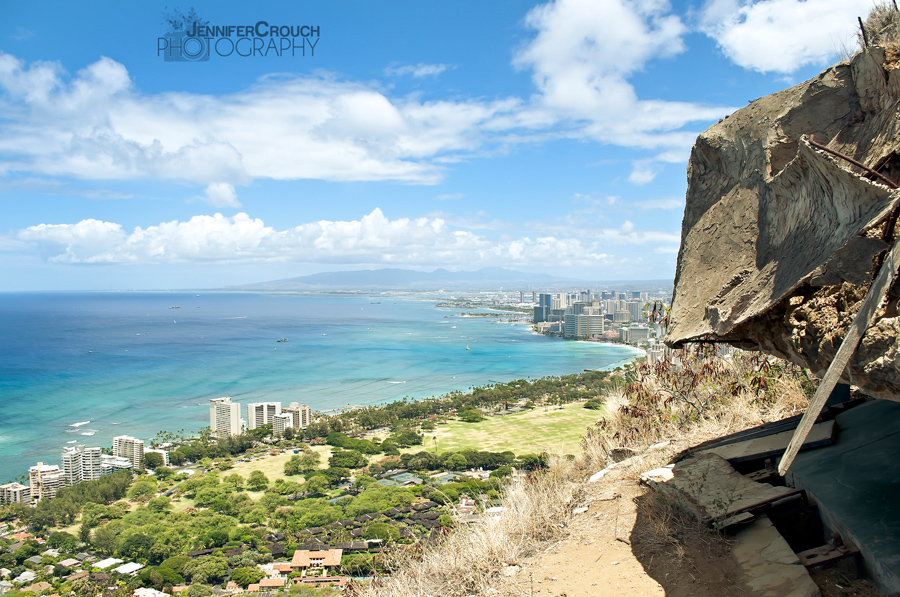 4. Ko'Olina Lagoons on West Oahu I took Katie's car (Sorry about adding all that mileage to the lease!) the last day of my trip and drove the west side of the island. I heard about Ko'Olina. They are man made lagoons with lots of resorts. I was not sure where to park so parked at a Luau. I set up my blanket on the beach and enjoyed the lagoon. There were mostly families there with kids. Not many people and within a few minutes a sea turtle came swimming by me. I left there and went to Waikiki to see what all the fuss was about and to get some cheap tourist t-shirts. The traffic was horrible. I did enjoy watching people surf. If I went back to Oahu I would stay at Ko'Olina versus Waikiki.

3. Swimming with sea turtles on Haleiwa Beaches | North Shore Earlier in our trip we went to Hanauma Bay and tried snorkeling. It was very crowded and not much to see with all of the people. The view at Hanuama Bay was gorgeous and the mongoose were funny running around. Katie took me to a North Shore town called Haleiwa. We set up camp on the beach and I headed out with my snorkel gear. Within 5 minutes I was swimming with about four sea turtles. It was amazing! Later in the week before leaving home I did a photo session there with Katie. We found this gorgeous dress for $10 at a thrift store. 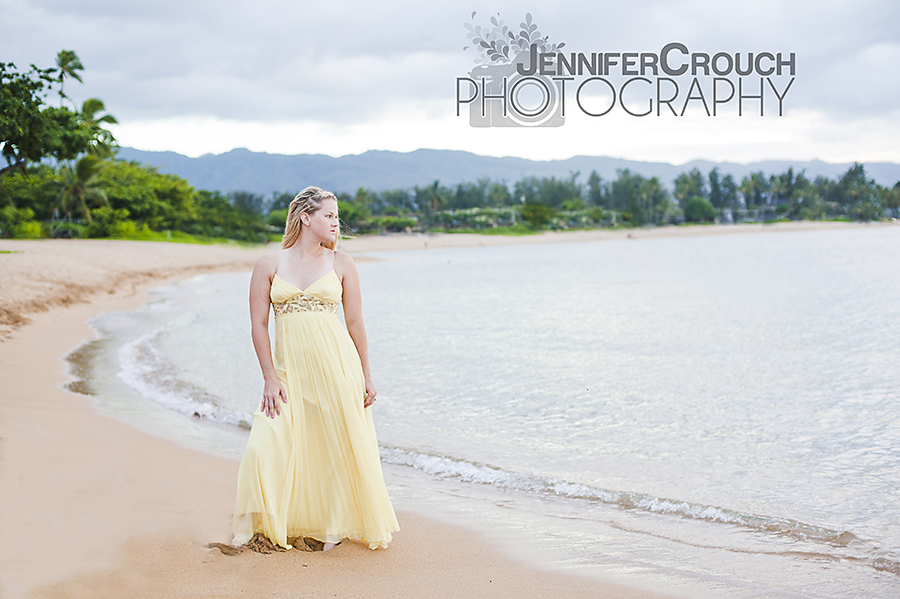 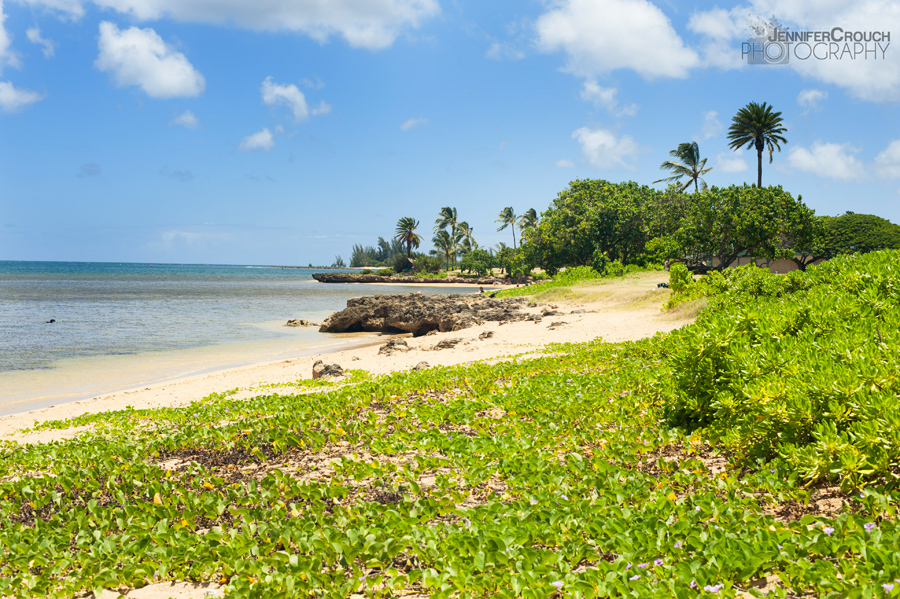 Haleiwa Beach where I swam with the sea turtles. They were huge.


2. Makapu'u Lighthouse Trail was the first hike we did on our trip. It was not nearly as crowded as Diamond Head. It was so beautiful from the top. It was a praise God moment for me to see His Creation. It was a paved trail most of the way. There was not much shade and you definitely need water to stay hydrated. I saw some people running up this trail! There were parasails overhead. I read that there are whale sightings too. 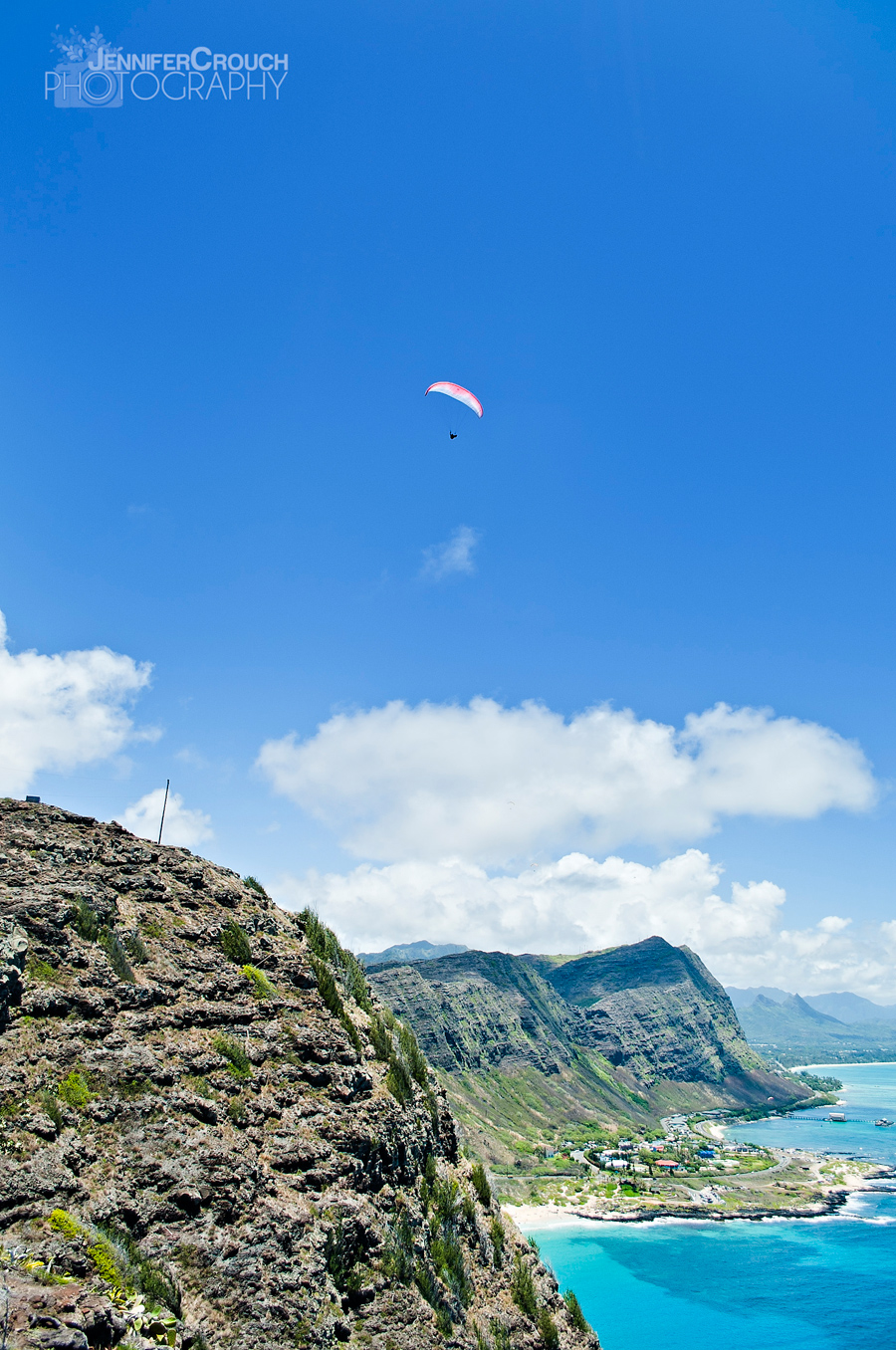 The view from the top of the Makapu'u Lighthouse Trail. It brought tears to my eyes. The distant buildings are Sea Life Park.

Honorable mention was Sea Life Park. It was located near Makapu'u Point. It was a small park compared to Sea World but was very nice. I enjoyed their shows and of course the view of the Pacific! 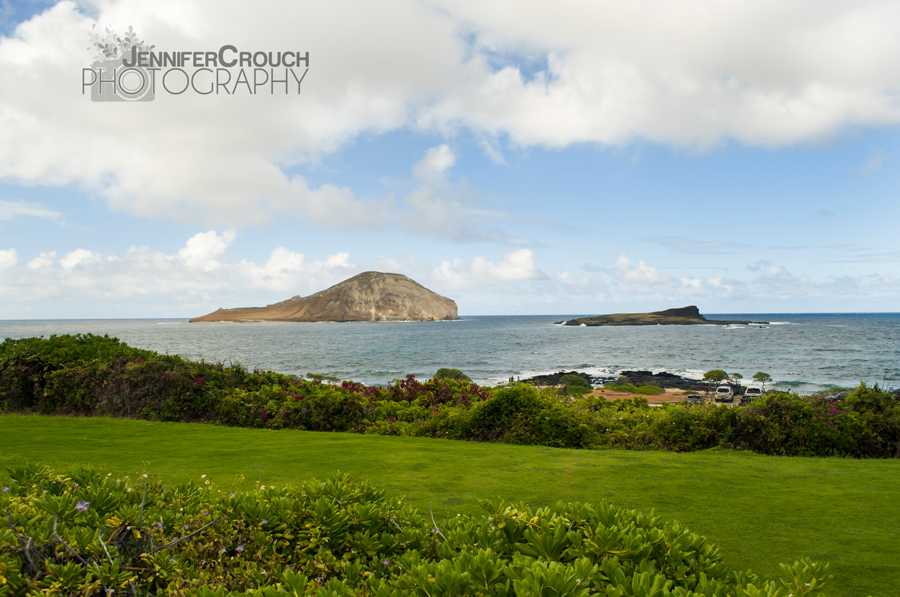 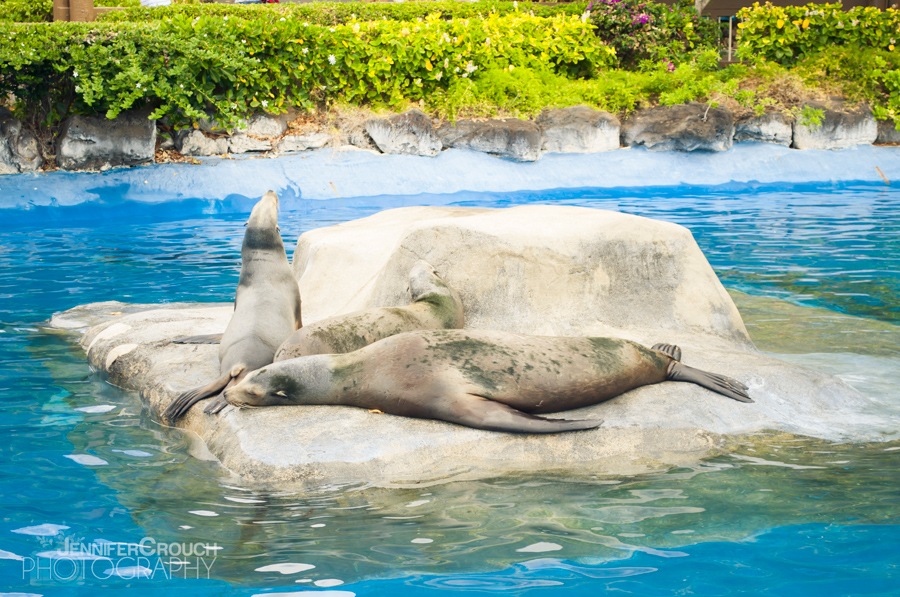 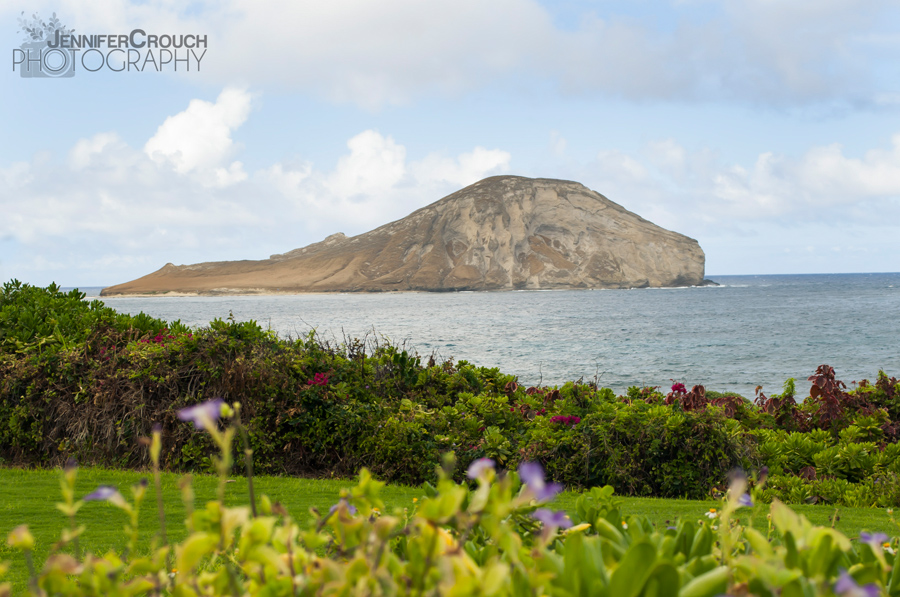 This was the view from Sea Life Park. They have Luaus and weddings here. Mānana Seabird Sanctuary or Rabbit Island can be seen in the ocean. RIMPAC was performing naval operations here. I was able to videotape the naval ships and helicopters from the Sea Life parking lot.


1. Halona Blowhole & Bay was by far my favorite place on Oahu. The drive east of Honolulu along the pristine blue Pacific waters was breathtaking. We stopped at Blowhole and then walked down the natural rocks to the natural bay below. This picture was taken at the bay. The water came in and out and reminded me of the wave pool at Adventure Island but turned up on high! Some crazy young men climbed the steep cliffs on the side. I could have gone back and spent the day relaxing there if there was time. It was peaceful and not many tourists take the time to walk down there. 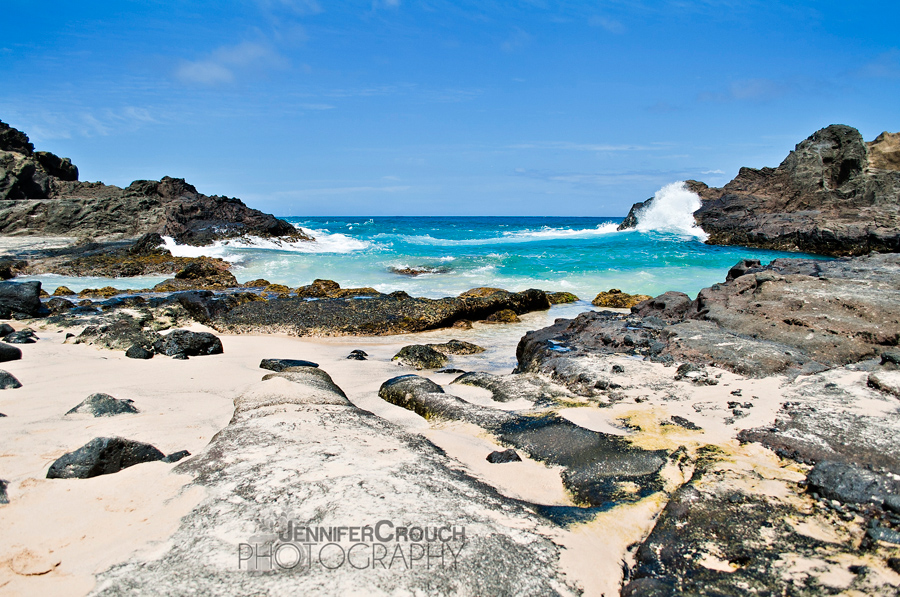 Sidenote: This location was where they filmed the famous kissing scene from the movie From Here to Eternity. View video clip here.

This was a trip of a lifetime. I was not a fan of the food on the island but had the best home cooked meals from Katie. I thoroughly enjoyed our time watching all of Pregnant in Heels off of iTunes. I will never forget our ride home from the Polynesian Culture Center. We were singing at the top of our lungs to Girls Just Want to Have Fun, and I had my head sticking out of the sunroof.

Thank you again Thomas and Katie for this trip. It goes down on record as my best vacation ever. Katie, I love the memories that we made together. Priceless.

Posted by Jennifer Crouch
Email ThisBlogThis!Share to TwitterShare to FacebookShare to Pinterest